After the Club became a charter member of the Gulf Yachting Association and began sailing against other Gulf Coast clubs, the sailing members began to push in earnest to move the Club from Harrisburg to Galveston Bay. By 1926, plans were firmly underway to finally relocate the Launch Club (HYC) permanently to Galveston Bay.

The Club's leaders wanted an impressive facility, one that would do justice to the city of Houston and showcase the fine, active organization the Club had become. Sailing with the club-owned boats was available to all while at the same time the Club counted among its ranks some of the wealthiest, most influential men in the city. Club members determined that the new clubhouse would be located in a new waterfront development only three miles south of La Porte called Shoreacres, a planned resort community with a luxury hotel site open year round and summer homes. The developers offered not only the land for the clubhouse but also $5,000 to go toward construction costs, which were estimated at $100,000.

The new building was completed July 4, 1927, just in time for the Club to host the first national regatta in Texas, the Mississippi Valley Speed Boat Association annual race.
The three-story stucco structure has been described at various times as Spanish Mission, Spanish Colonial Revival and Spanish Mediterranean. It had a long screened porch running the length of the building on the second floor. Inside, also on the second floor were the dining room and the manager's offices. At each end of the building was a massive fireplace. The floors were hardwood, the columns joined with arches, and nautical plaster molding adorned the walls at ceiling height. The elaborate kitchen was said to be one of the most modern in the entire country. Access to the building was gained by two sets of stairs, each in the center of the building, one on the south side and one on the north side. Fronting the base of the north stairs was a tiled fish-pond. Inside, the south stairs led to the hotel rooms and the women's dormitory on the third floor. Outside, a one-story building between the water and the clubhouse housed the men's dormitory and sail room; a combination servants' quarters and garage was located south of the clubhouse. A station of the Southern Pacific scenic Bayshore Line was located in Shoreacres only a short distance from the Club site. Accessible not only by car, train, and boat, the Club was to have its own airport. The short lived Houston Yacht Club airport opened on land adjacent to the Club property, an area now occupied by Bay Colony subdivision. The swimming pool was constructed during the tenure of Commodore Howard Lee after World War II. 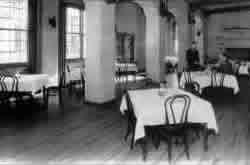 During a remodeling program that concluded in 1953, the second floor verandah was enclosed to accommodate casual dining, the floors carpeted, planter box dividers added and murals painted above the fireplaces. The building underwent a major remodeling and "modernization" in 1961 when a ballroom was added and the arches and nautical embellishments were removed or covered. The second-floor double doors and pool side stairs were removed, the fireplaces were either covered or demolished, the offices were relocated from the second floor to the first, and a new front entrance and dramatic, curved lobby stairway was constructed. 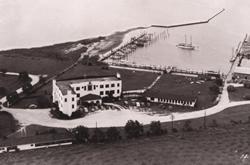 In 1993, during reconstruction after a fire, several original features were restored in an effort to bring the ambiance of the past to the building. The wide north stairs and double doors leading to the pool were reconstructed, the second floor columns were once again joined with arches and one of the two original fireplaces was discovered intact behind a kitchen wall and restored.

HYC celebrates the 90th anniversary of this Galveston Bay landmark, affectionately dubbed the Pink Palace during 2017. 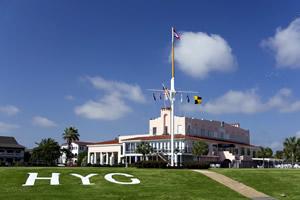