The 22.5 foot Ensign was designed by Carl Alberg. Pearson’s initial production in 1962 was 60 boats, but the Ensign was so popular that production for the year grew to 219 boats. In excess of 1,800 Ensigns have been built. It is now being produced in Michigan by Ensign Spars to the original specifications, ensuring that all of the produced boats meet class specifications and are competitive.

The boat was inducted into the American Sailboat Hall of Fame in 2002. Some of the characteristics that contributed to this honor are a shapely, classic hull and enough ballast to make it a joy to day sail on a sunny, breezy afternoon. The huge cockpit has room for five or six people and is deep enough that you don’t have to worry about banging your head on every tack. In addition, the 1,200 pounds of ballast in the keel means you don’t have to worry about capsizing. And even if the boat does fill with water, its generous flotation ensures that it will float. And, it can easily be raced with three or four crew.

The Class conducted its 50th National Regatta in 2011 at Canandaigua, NY with 44 boats hitting the starting line. In 2012 the Class celebrated the 50th anniversary of the founding of the Ensign Class Association. Fleet 2 celebrated its 50th anniversary in 2013. The Fleet encompasses Galveston Bay and currently has approximately 25 boats, most of which are at the Houston Yacht Club.

The Class Association has gone to great lengths to ensure that the class not only remains uniform, but that it doesn’t cost an arm and a leg to be competitive.

In addition to participating in HYC Regattas and Series races, the Fleet sponsors the “Kids Cup” for junior sailors and has a weekend cruise/race to Oak Island. 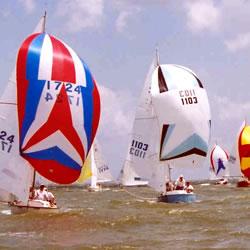 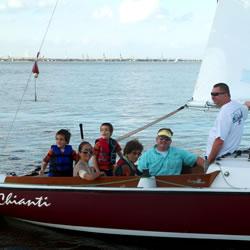