Yachts and yacht clubs are great users of flags. They are colorful, festive and informative. Every yacht owner should be familiar with the customs that apply to all the types of flags typically flown on a vessel.

The familiar 50 star “stars and stripes” flag is also known as the national ensign afloat. It is the most important flag on board and identifies her national character. A vessel’s character is determined by her registration, which may differ from that of her owner. This is especially important abroad and on the high seas. Most HYC members’ vessels are federally documented or state registered and thus should fly the national ensign.

A ship’s national ensign is immediately recognizable because it flies farthest aft (the place of honor), but not necessarily from the highest point in the rig. With the possible exception of battle flags, it should be the vessel’s largest flag.

Normally the national ensign is flown from a staff on the vessel’s stern. No other flag may be flown from this position. However, it is also permissible on a sailboat to fly it from the leech of the aft-most sail about two-thirds of the way up; or from the peak of the gaff on a gaff-rigged vessel. Sport fishing boats, which cannot fly the ensign from the stern when underway because of interference with fishing lines, fly the ensign from the aft end of the tuna tower on the centerline; and often leave it there when not underway. When not underway, the national ensign is only flown from the stern staff on all vessels.

Here are some tips for flying the American flag correctly:

Do: Choose the right size!
The fly (length) should be one inch per foot of overall boat length, with the hoist two-thirds of the fly. Use closest ready-made size.

Don’t: Fly a flag that is too big!
It doesn’t mean you are more patriotic, it only means you aren’t displaying the flag respectfully!

Do: Fly it during daylight hours ONLY!
The American flag is properly flown ONLY from 0800 to sundown while in the harbor. Other flags (e.g. club burgee, officer’s flags, private signals, fish flags, etc.) may be flown at any time the vessel is in operation.

Don’t: Fly the American flag from the: 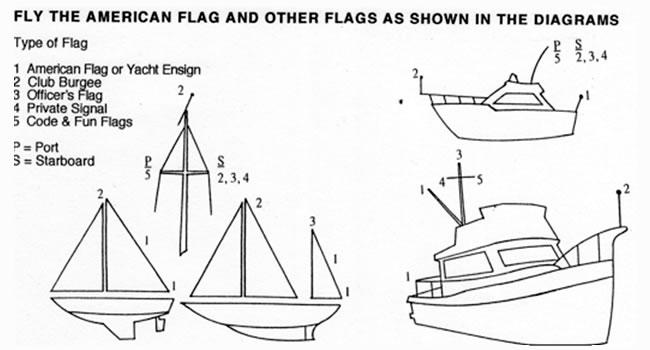 American yachts may also fly a flag called the Yacht Ensign. This flag is similar to the U.S. Ensign except a circle of 13 stars surrounding an anchor replaces the 50 stars. It was established by Congress in 1848 to identify yachts that do not have to clear customs when entering ports; licensed yacht were require to fly it. The law has changed so that the yacht ensign is now an option for any American recreational vessel. Thus either the national ensign or yacht ensign may be flown by US yachts, but not simultaneously. When a US yacht sails in international waters, the 50-star flag must be flown and not the yacht ensign. 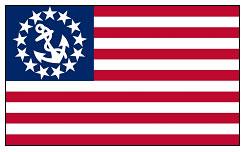 Yacht and sailing clubs have flags to distinguish them, called a burgee. Most yacht club burgees are pennant (three sided) shaped like the HYC burgee, but a few clubs use swallow-tailed flags, while a very few use rectangular flags. Our club has a collection of burgees from many other clubs that are displayed in the bar.

Flying the burgee is an important part of belonging to a yacht club and a vessel owned by a member of HYC should fly our burgee with pride. Our burgee has appeared in its present form since 1928.

The burgee is flown from the bow staff on a powerboat, while most sailboats fly the burgee from the starboard spreader. The traditional position at the top of the mast is no longer used because of interference with wind sensors and antennas. Normally a vessel displays only one burgee at a time. Exceptions are made for opening day and other special occasions when owners will string together all burgees of clubs to which they belong, with the HYC burgee at the top of the string for HYC functions.

The yacht ensign’s circle of 13 stars surrounding an anchor forms the basis for the officer flags used by HYC and many other yacht clubs for the commodore, vice commodore and rear commodore, with the background being blue, red and white respectively. Other officers, such as fleet captain, secretary, treasurer, and past commodore, etc., have their own flags. HYC Past Commodores also have a unique swallow tailed flag to fly, which is the Past Commodore’s flag from 1907. On sailboats the officer flag is flown immediately below the burgee. On powerboats, the officer flag is flown from the mast, with the club burgee keeping its place flown at the bow staff. Officer flags are flown only when the officer is aboard.

On national holidays, HYC Opening Day, boat christenings, marine parades and other special occasions yachts often “dress ship” with a rainbow of International Code of Signal flags. The sequence is based on a harmonious color scheme and has no meaning in terms of letters or numerals. Flags are flown beginning with “A” at the forward waterline, over the stem and the top of the mast(s), to the stern and finally to the waterline aft. The flags discussed above are flown in their usual places.

Important: If you don’t have a set of signal flags, sets of decorative pennants are available at modest cost.

Power boats too! This is not just for sailboats.

One of the oldest traditions in yachting is that of the “Private Signal.” A private signal is a unique flag that communicates the presence of a specific individual or family on a boat. They are personal flags, or logos, similar to family crests. The tradition of the private pennant signal, or “house flag,” currently used dates back to the 18th and 19th century when the sailing ship lines were at their peak.

If you would like to have a private signal, here are some tips for good design:

Keep it Simple – A design without small details is easiest to see from a distance. It is also easiest to reproduce, which is important when you have your flag reproduced on clothing, dishware, etc. Traditionally, initials are not used.

Consider Mirror Image Designs should look nice from both the front and back. Thus, words don’t usually work well since they will read backwards on one side. Double-sided flags can be made but are much more expensive.

Few Colors – flags limited to 2 or 3 colors look better. They are easier to see from a distance and easier to reproduce.

Color Choice – Basic vivid colors work best. Use contrasting colors, light and dark. Colors that are similar, such as blue and green, will be harder to distinguish from a distance.

Courtesy flags: When a US vessel is in the waters of a foreign country, it Is expected that she will fly the host country’s national flag from the starboard spreader on a sailboat or from the starboard spreader of a powerboat with a mast, or the bow staff of a mast- less powerboat. This is especially important for boats going to Mexican or Caribbean ports. Note that the Bahamas, The British Virgin Islands, the Cayman Islands and the United Kingdom each have red ensign versions of their flag that are the correct flags to be used for this purpose.

Fish or Prize Flags: Fishing boats often fly flags denoting their catch. Flags denoting marlin, wahoo, sailfish and other species are available from marine suppliers. They are flown from the port outrigger or spreader, and are flown upside down if the catch was released.

Blue Gavel Flag: Past commodores of HYC who have been inducted into the International order of the Blue Gavel may fly the IOBG flag. When flown it replaces the past commodore’s flag. 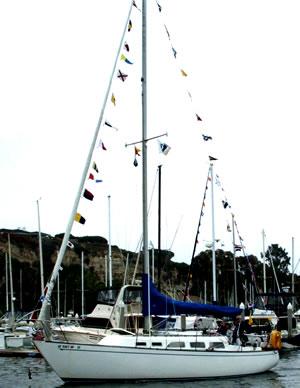