With the organization of the first regatta more than 100 years ago, HYC began a long tradition of service to the yachting community. This is evidenced by the early annual regattas featuring both sail and power boat races:

By the 1960’s, HYC was hosting national and world championships on a regular basis. At the 1991 annual meeting of the United States Yacht Racing Union (now US Sailing), HYC was awarded the prestigious One-Design Club Award, given annually to “the one-design yacht club of the year to recognize administrative excellence, fleet growth, creative programming, regatta support, and member contribution at regional, national, and international levels.”

HYC’s reputation as a host for well run national championship regattas was recognized by US Sailing in 1984 and 1990 by the awarding of the St. Petersburg Trophy. This prestigious trophy, awarded annually, is emblematic of excellence in race management. HYC has had several members meet the qualifications for certification in the US Sailing Judges Program as umpire, senior judge, and judge. Members have also qualified at various levels in the US Sailing Race Officers Program, including three members who are Certified Principal Race Officers. 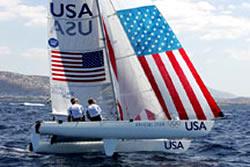